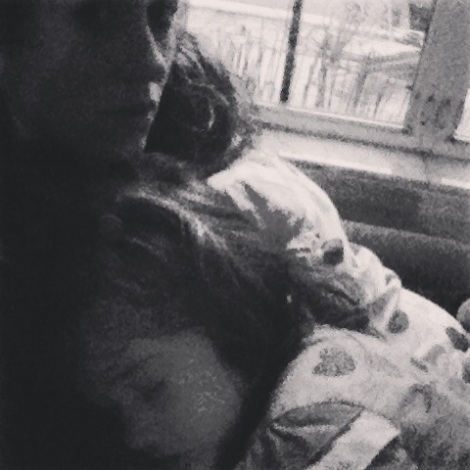 I get my first “sick call” from my daughter’s school.  My daughter just started 4 days earlier so I was kind of shocked. Earlier that morning Riley had a funny cough but I figured maybe it was pollen related due to allergies to the tree pollen. Oh and of course, I was giving her dairy in her sippy cup and in her lunch box. Duh!?

Sure enough, Riley had a 101.7 fever and was extremely lethargic, coughing really bad, running nose and just wanted to lay down and watch shows or go to sleep. We came home and I was non stop Nurse from Thursday afternoon to Sunday night at 9pm….the illness of bad enough that Jordyn then got the illness. She was just 1 day behind Riley.

I was super worried about Riley’s cough and congestion and tried to put my ear to her back to hear if there was any liquid in her lungs. I decided it best to be safe to go to Dr when she said her ear was hurting.

So, off to the Dr I went. Dr Cano at Suncoast Pediatrics never fails. Love that guy. He’s a bit deadpan and a total conservative. Looks at Riley, everything is great but says she’s just got a mid ear infection, mostly caused from the extreme congestion she has. Said he doesn’t advise antibiotics unless it gets out of control, gave me a prescription as a back up in case it go out of hand, said wait 48 hours and continue to administer garlic mullein oil in her ears.  I proceeded to cut out all dairy, loaded her up with immune boosting vitamins and fruit and several baths daily to clean out the congestion.  And I gave in and started giving her Motrin because she was so miserable.

As if the sleepless two nights were bad with Riley, the next two nights with Jordyn were even worse. I was up every 10-15 minutes with Jordyn who was vomiting green mucus and also had a bad fever.  And then it started taking a toll on me. I got a bit congested. only. Thank god.

Jordyn hated and refused any immune boosting vitamins unless it was a juice and Riley was taking Motrin 2 times a day. Her fever was going up and down. Always right back at 101.7 or a bit higher.

My husband got desperate and went out to buy more fruit and get antibiotics for Riley who looked like hell. The pharmacy was closed?!! Was that a sign?  I kinda felt it was. I knew the Motrin was causing a false break in the fever and decided despite how miserable Riley was to take Motrin out of daily the routine today and just let the fever, ear ache run it’s course.  Sure enough the fever slowly dropped from 101 down to 98.6 by 9pm.  The Motrin while helping with the pain, was delaying her getting better.

Jordyn on the other hand had another bad night of tossing and turning and gross coughs. I gave her a bath at 2:30am despite her begging me to not.  Finally 3:30am-6:30am she slept straight through.

From 6-9pm the girls both slept on me on their glider.

Riley woke up totally back to normal with no ear ache, slight congestion and a small cough.  Jordyn woke up with a little worse but both back in great spirits and playing and laughing again. Yay I was so happy my girls were back. And they ate a whole apple. Prior to that they would eat small bits and drink 8 ounces roughly of liquid.

4 sheer days of hell and I made it out alive without the use of antibiotics. My apparent success:

1. Probiotics – find one with more than 5 strains, super important. I used this one
2. Tons of fruit made available (bananas, apples, strawberries, blueberries and raspberries).
3. Liquid juice of some kind, either Ultima electrolytes or apple juice mixed with water, probiotics and Elderberry syrup mix.
4. Smoothie fruit with garlic, vitamin C and elderberry syrup.
5. I syringed elderberry syrup, 1000 mg of powdered vitamin C and some maple syrup and probiotics 2-3 times a day, always after some food.
6. Frequent baths to clean out the congestion
7. Garlic mullein oil in the ears 2 times a day, sometimes 3
8. Thieves oil applied in the bath, on their bodies, and around the house. Loved this article that my friend sent to me.
9. Humidifier, head elevated on pillows and small drops of eucalyptus oil in the bed.
10. Thieves oil on the body as described in #8.
11. Assists; the Body Comm, was amazing with Riley.

I am writing this because while it’s unbelievably painful and was draining on both myself and my husband, I would’ve rather suffered this way than to give my girls antibiotics that would then further destroy their gut and cause other attendant problems that I wasn’t willing to endure, one being fast relapse of illness and other allergies created from it.

I learned something from this, that while antibiotics are a must for some, you can avoid it. And it’s better to avoid it. This article really gave me great insight on why I avoid it at any cost.

Started running at age 9 and always loved learning about nutrition and health. When I was 17 years old, 30lbs over weight and diagnosed with hypo-thyroidism I decided to heal myself through diet and exercise. Having fully recovered from that and having three children I have learned how to effectively heal my children through diet. I decided through pressure from friends to document my success on a blog and here I am. 2018 will be a big year for me. I hope to be well on my way to finishing my degree in Pediatric Nutrition.
View all posts by Britt's Health Tips →
This entry was posted in Uncategorized and tagged alternative ways to avoid antiobiotics, antibiotics, children, cold, cough, elderberry syrup, flu, green snot, http://kidshealth.org/parent/h1n1_center/h1n1_center_treatment/antibiotic_overuse.html, mucus, thieves oil, toddlers, vitamin c. Bookmark the permalink.